After receiving a new Raspberry Pi 3 at Christmas I quickly set off looking for uses for this wonderful machine, and quickly found myself hooking it up to an LCD display. This post covers the Python driver I used and modified, as well as some other useful resources.

Firstly as an owner of the original Raspberry Pi model B I was pleasantly surprised how capable the Raspberry Pi version 3 is. The performance is much improved and the new built in wireless is a superb addition which makes this version of the Pi more  usable and reduces the friction caused by having too many USB devices hanging off it like a mutant spider. The Pi v3 is powerful enough to be used as a basic workstation and I found myself working on it directly (within Raspbian OS) making the coding workflow more enjoyable as a result than the previous models. Also the as VNC Server is now built into the Raspbian OS it makes setting up the Pi as headless very easy. In fact once you have installed Raspbian and setup VNC then you can run it with just the power supply connected which makes it use little space and you can locate it anywhere. 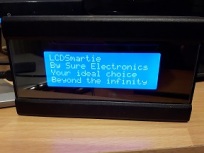 Once my Pi3 was up and running I decided to connect an old LCD matrix screen to it. This LCD is Sure Electronics 20×4 screen which I bought years ago to attach to my HomeServer but never got around to it. The LCD has a USB interface and was used on Windows via the LCD Smartie application. A quick google showed that LCDProc is an equivalent tool for using LCD screens with Linux, and I found some useful tutorials (e.g. here & here). You can install LCDProc via “apt-get install lcdproc”.

I only had limited success with LCDProc but soon realised what I really needed was a programmatic way of controlling the LCD as opposed to a general display tool, so after some more googling I found a few variations of python drivers were being used to control similar LCDs, and this “Smartie” driver by Steve Davis worked best for me, which in turn was inspired by this driver. These drivers use the “pyserial” Python module, easily installable via Python PIP package manager:

Whilst the smartie driver initially worked I found that it failed to work after a reboot. After some serious head scratching I realised that it would always work after running LCDProc, meaning the initalisation code for LCDProc setup up the LCD successfully for the Python driver to communicate.  After digging into the Sure Electronics manual and digging into the source code for the SureElec driver for LCDProc (here & here) I was able to find the initisiation command codes for the LCD and add this to the smartie python driver. This enabled the Python driver to be used without relying at all on LCDproc or similar software.

I have also added some new functionality to the driver which includes flashing, wrapping text and scrolling multiple lines etc. Also included is a demo function that runs through the various functions provided by the driver to show what’s possible and to help testing after making any modications. My updated driver can be found on my GitHub repo (https://github.com/RichHewlett/smartie). With this driver i was able to control my LCD backlight, display text and get a temperature reading. The fact that it was writen in Python was a bonus as I find Python a great langage for coding fun projects. 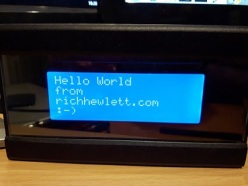 If you have a Sure Electronics LCD you may be able to take this and use it, or modify it as required, although there are many variations of these devices. Once you have connected your LCD and rebooted the machine just check that the LCD is on the right USB port in Linux (e.g. /dev/ttyUSB0) and that the user has permissions on that port. If you have a Sure 16×4 screen then this will probably work by modifying the SCREEN_WIDTH constant to 16. If you have a different LCD Screen then you may need to modify the initalisation codes and command strings that get sent to the LCD by each method. A good source of refercence is to check out the LCDProc source code for their bundled drivers as they support many screens.

In the next post I’ll cover my next step of building Python Web App using Flask to control the LCD screen from a browser.